These are the new accessories designed to be 3d printed. 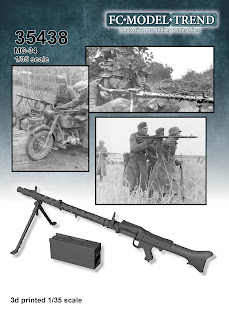 A finely detailed MG-34 is always useful for German AFV, scenes and figures. 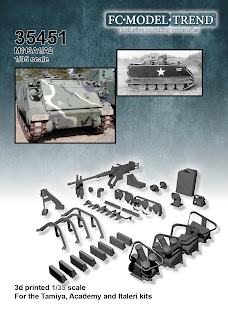 The Tamiya M113 kits are old enough to need some fine details to make them look more accurate. 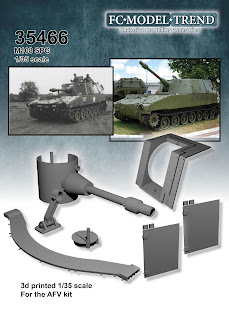 The old Italeri M108 is not up to modern kits anymore, better use the mre modern AFV M109 kit as a base for a highly detailed M108. 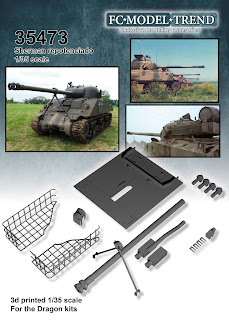 The Argentinian Sherman repotenciado has always been a "must do someday" project for me, I designed these parts to finally make use of the Dragon and Asuka Firefly kits to build it. 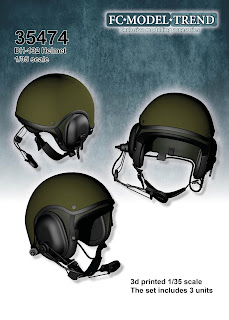 The DH 132 tank crew helmet has been in use in many occident army for a long time. 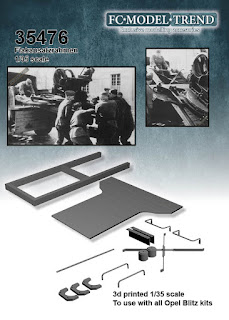 This flakaufsatzrahmen is made of both 3d printed and cast resin parts taht can be built in a couple of minutes. The separate parts make it adequate for any Flak kit available 1/35 scale. 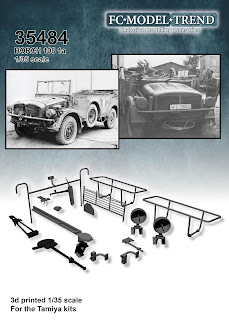 The Old Tamiya Horch is inaccurate and has many simplified and overscaled parts. these 3d printed parts will upgrade it easily ans most of them just replace the plastic ones. 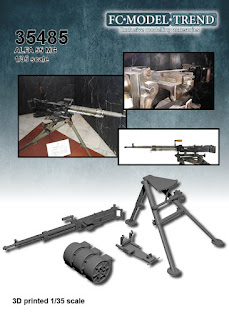 The Spanish built ALFA 55 machine gun was based on the previous ALFA 44 model and was used until the 70s decade. 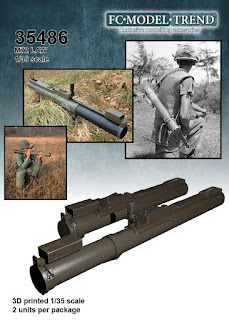 The M72 LAW rocket launcher provided the U.S. infantry with a capable anti tank weapon for a long time. Since it was released in 1963 has been used in mostly every modern war as late as the Irak and Afghanistan conflicts. This set includes one closed and another extended M72. 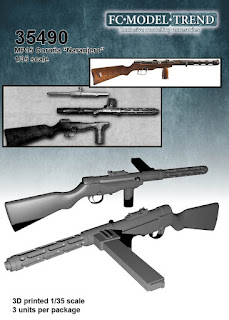 The "naranjero" was a Spanish built version of the German MP28 and was widely used by the republican forces during the Spanish civil war. 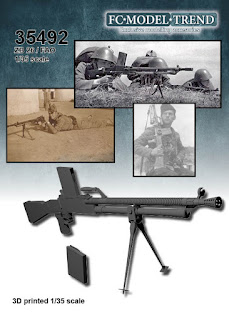 The FAO machine gun was a Spanish licensed built version of the Czech ZB vz.26 and was widely used during the Sidi-Sahara conflict in 1957/58. 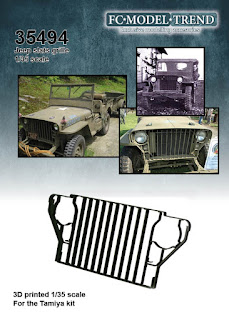 The early Willys models used this thin slats grille similar to the Bantam model. This is a single 3d printed part that can be used to replace the one provided in the Tamiya 1/35 scale kit. 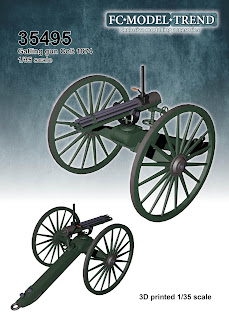 Who doesn't like the Gatling guns? This version built by the Colt company in 1864 is made of just 5 3d printed parts that can be built in a moment. 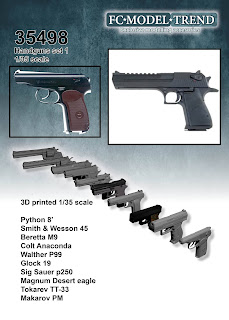 This is a selection of modern automatic pistols from many countries that are 3d printed with maximum quality. 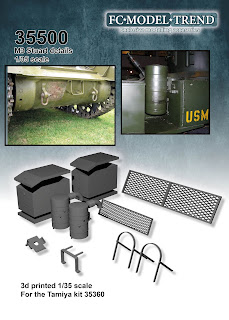 Even the new Tamiya kits lack of theirt typical oversized and simplified parts. This 3d printed parts set includes some replacements that are ready to use. 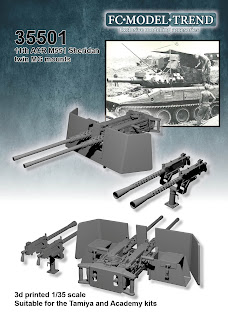 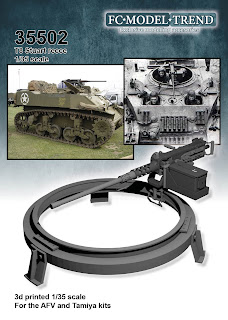 This set of 3d printed parts will allow you to transform the Tamiya and AFV M5 kits into a T8 recce vehile. 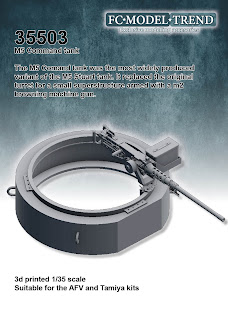 And this one provides the parts for transforming the Tamiya and AFV M5 kits into an M5 Command. Just change the turret for the 3d printed parts. 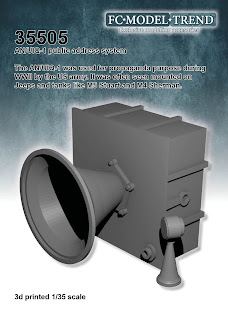 The UIQ-1 loudspeaker was often seen on the last days of the WWII when the U.S. troops made use of their propaganda platoons. 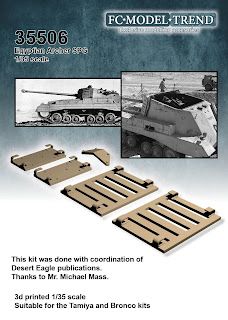 This simple kit includes the parts to convert the bronco and Tamiya Archer kit into one of the used by Egypt and later Israel providing them with some add on protection. 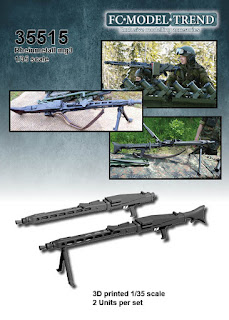 Lots of modern AFV are equipped with the ubiquitous MG-3 machine gun, unfortunately not all kits are the same quality but you can have these 3d printed ones both with and without butt to substitute the plastic ones. 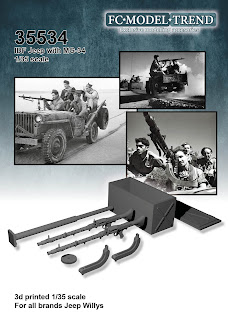 The new Dragon IDF jeep is not as complete as we would like so here is an easy adapting set of 3d printed parts to make your own with any bran jeep Willys 1/35 scale. 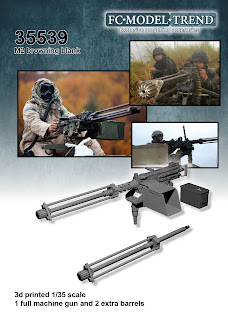 The M2 browning is used on exercises with a blank fire adaptor. This set includes one complete M2 with the adaptor and two separate barrels to use with other M2s. 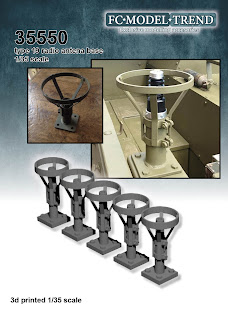 Some pieces are too delicate to reproduce in plastic but 3d printing can go one step further. This British antenna guards will be very useful for WWII AFV. 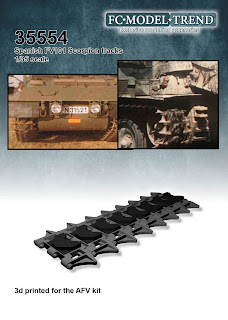 The Spanish FV101 Scorpion used a different track with chevron shoe. Here is a new system to provide the tracks. A full lenght that can be clicked to separate the links so you can have them one by one and by lenghts. 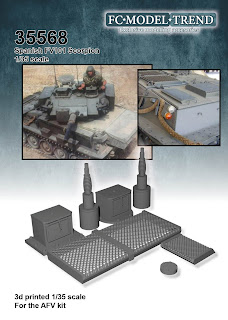 Second set designed to be used with the AFV kit to build the Spanish version of the FV101Scorpion. 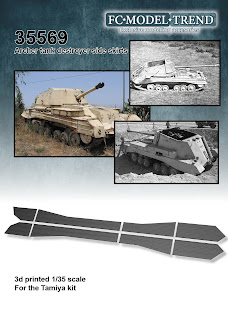 Unlike the Bronco kit of the Archer SPG, the Tamiya one doesn't include the side fenders so here are designed and 3d printed in sections as the real ones. 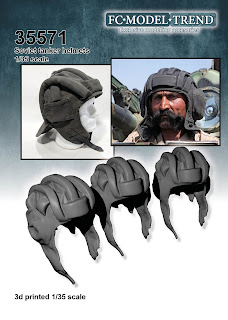 All modellers like adding special details to their afv models, here are some Soviet WWII tank crey helmets that you can put anywhere you like. 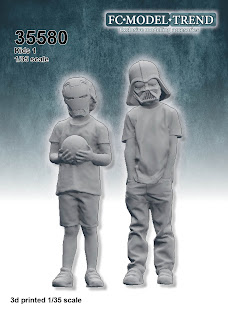